After weeks of (mildly half effort) training Rachel & Annie Pig took to the Northumberland roads for the Cyclone Challenge. Rachel Pig was riding for Cancer Research UK in memory of her wonderful mum and auntie and Annie Pig was riding for Bloodwise in memory of their lovely friend Jack. As well as riding for those amazing people and incredible charities they also used this time (as they were aware it may take them a while) to launch their ‘Protect Your Beautiful Brains’ campaign donning their new cycle tops and knitted brain helmet covers made by a fellow fundraising cyclist. 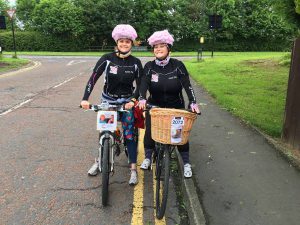 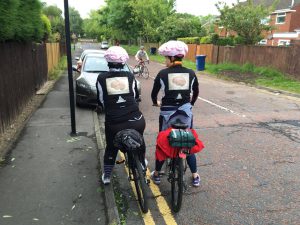 We asked said fine lady to write a bit about why she began making knitted bobble hats for bikes:
“Back in 2012 I finished a years treatment for breast cancer. I was in hospital for a follow up appointment when I opened a magazine and saw an advert for Women v Cancer cycle Cuba which is where these challenges started for me. The Cuba cycle was perfect as it meant I had to get fit which I had lost over the year of treatment, It also gave me a way of paying back as I knew I wanted to help make a difference. So I have set myself a challenge to do at least 5 overseas challenges and 5 Ride The Nights all raising money for the 3 Women v Cancer charities. It was leading up to the 2nd Ride The Night that I came up with the idea of bobble hats for cycle helmets as a way to raise some of my fundraising and I have been knitting and bobble making ever since. So far there are > 200 in Team bobble hat raising > £2.5k.
It is so lovely to see ladies sporting their bobble hats knowing we are all doing these challenges for our individual reasons but all raising funds too. It’s occurred to me if the reason that some people choose not to wear a cycle helmet is how they look it could be argued as part of your ‘Protect Your Beautiful Brain’ campaign that they could adopt a cycle bobble hat too!” – Jacqui Batterbee. 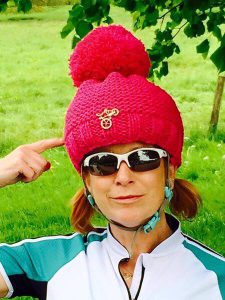 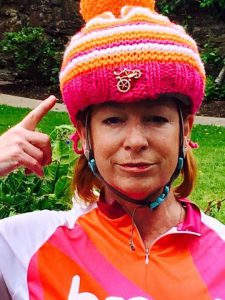 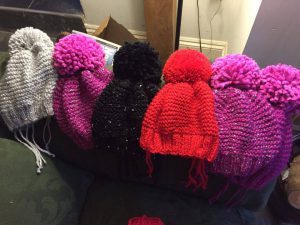 This was the biggest challenge Rachel & Annie Pig had done to date but the beautiful weather coupled with the incredible views and outstanding support from the villages who posted home made cakes into our mouth as we went pelting past really gave us an almighty wallop of a boost – and every time we hit a hum dinger of a hill (which did happen quite a bit) we just gritted our teeth and remembered why we signed up for this and powered on through to the end. 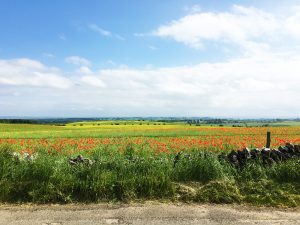 We will be entering next year so do let us know if any of you want to join us – it is not for the weak hearted but the home made cake and the chance to sport one of the amazing brain hats is totally worth it! 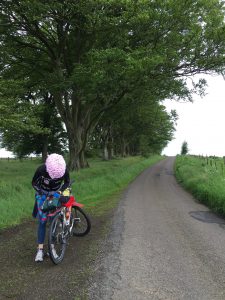 Wearing a helmet on your bike, you would think, is common sense. Making sure your children are wearing a helmets when on a bike/ scooter/ skateboard is a given – yet so many people do not do either of these things. This is something that we at Whiffle Pig want to change.

Since Rachel Pig & Annie Pig have taken to peddling like they’re being chased, around England in various events they thought it would be a good time to start marketing their new campaign. Your beautiful brains are so important and SO fragile, you really must take care of them. Accidents can happen at any time so we are not saying wear protective head gear whilst pottering round your house and garden but you are more likely to cause damage from falling off/ being knocked off your bike/ scooter. The repercussions of having a head injury to not only yourself but the people around you is enormous and life altering, even with a reasonably quick recovery. 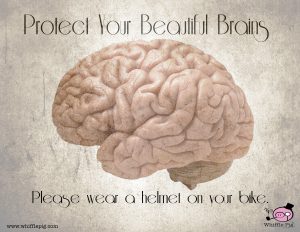 To keep this campaign going we will be posting facts about your beautiful brains so you can appreciate that lovely squidgy mass which is reminding your legs to walk and your mouth to speak and finding new ways to encourage you to wear a helmet, it really does matter so much.

Back in 2013 Annie Pig had this wild idea to enter herself in the bike event ‘Action for Charity – Ride the Night’. This was a huge 100 kilometres (62 miles) from Windsor up to London and back again through the night to raise both money and awareness for female cancers, sponsored by Breast Cancer Care, Jo’s Cervical Cancer Trust and Ovarian Cancer Action. During her training she fell ‘ill’ and discovered she was incubating a Whiffle Piglet so had to pull out of the event. 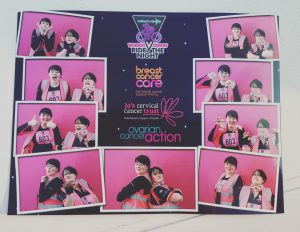 Ever determined she signed back up to take part this year and roped one of her old friends in so she wouldn’t be peddling the streets of London on her own. It was an utterly incredible experience right from the get go. The event itself was extremely well managed – buzzing with music and excitement – everyone getting free temporary tattoos and having their free photoshoot. The ride itself was spilt into waves from 21:00 until 22:30 set offs so that there was no bottle necking on the way and the weaker riders stood more of a chance of getting back before the 7am cut off point. The feed stops along the way were heaving with cakes, soups, hot drinks not to mention toilets and a Halfords team to give your bike a little tweak if needed. 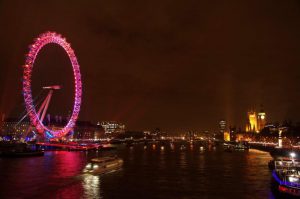 The laughter, kindness and moral was evident throughout from everyone who took part and even from complete strangers cheering in the streets and handing them money. Annie Pig feasted her eyes on a range of interesting sites including the token gent vomiting outside a take away, the occasional drunken couple arguing and two tabby cats riding shot gun in a car at midnight – not to mention the glorious sight of the London Eye lit up bright pink to support them all. 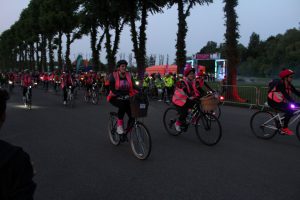 Annie Pig and her loyal friend Charlie rolled across the finish line not long after 4am feeling elated and emotional. The whole event collectively raised just under £1,000,000 which is just awesome. We highly recommend taking part in this as we certainly will in the future! 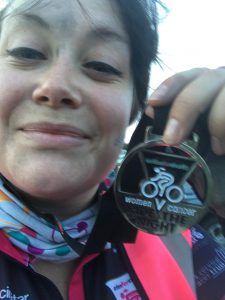 Follow the link here for more information and to join us next year!

The NatterJack is officially live and rocking. For those of you new to this event it is a 27 bike ride from Ashbourne Cycle hire on the Tissington Trail to Parsley Hay and back. It has home made cake stops along the old railway stations which are free to the cyclists. There are Whiffle Pig workshops, arts & crafts and general merriment happening at the start/finish line for those who can’t ride and for family members.
https://www.eventbrite.co.uk/e/the-natterjack-tickets-21871515291
This event is to raise money for Bloodwise in the memory of our wonderful friend Jack. This event was started last year as support for Jack and his lovely finance Nat when he was diagnosed with Acute Myeloid Leukaemia, something for them to focus on during his month of aggressive therapy and something for all of his friends and family to get involved in wholeheartedly. Nat & Jack even managed to surprise us all on the day by coming from hospital to greet us all sweaty, exhausted and utterly elated.

Jack passed away last month leaving us all desperately saddened . He loved the NatterJack and was so happy we were going again this year – we intend to run this every year from now on.
Bloodwise are such a good charity. They have supported us all from the very beginning of this journey and were kind enough to invite us along to meet the professors working in the lab, to see the work they are doing to try and fight and stop blood cancers. Please watch us for all the fund raisers we do to support this charity and take part in as many as possible – we could save a life!